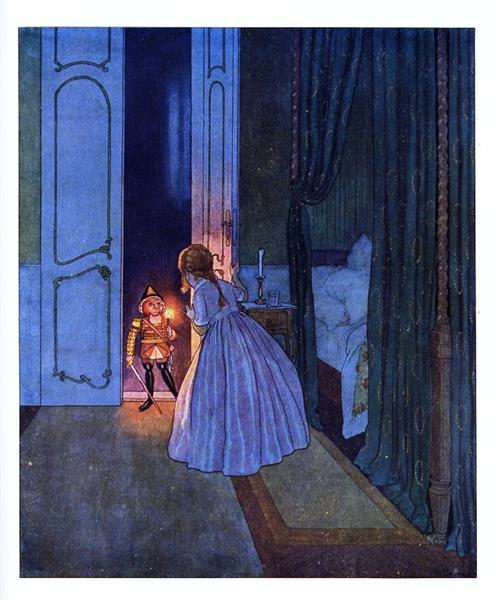 Let’s continue with the Christmas-themed fairy tales, in our most magical column.

We talked last time, that what we really like about Christmas is that special atmosphere. And the indissoluble hope that on that night between December 24th and 25th, something special will happen to us. It all comes from the night that the very magic of the Savior’s birth took place.

This is why many fairy tales and magical stories are set on this night. One of the most beautiful, typical and evocative of all, which has always been an emblem of Christmas, is the story of the Nutcracker.

Before talking about this story, an important clarification must be made. The Nutcracker is a story revised and corrected an infinite number of times, very often sweetened. It is always and in any case a beautiful fairy tale, in which in the end good triumphs and magic turns to help good.

In this one which the king of mice was a monster with several heads. And following a Romantic idea, people get succombe to a magical entity, more power than them.

Alexandre Dumas (the father of the Three Musketeers) wrote his version in 1845, shortened and made more digestible, similar to a beautiful Christmas fairy tale for children and without the moral load. The latter constitutes the actual backbone on which Petipa, the great French choreographer in the service of the tsars, built the much loved ballet in 1891. With the unique contribution of the music of Pëtr Il’ič Čajkovskij.

From there the tradition began, as the ballet spread to all European theaters and became a typical of the Christmas atmosphere.

The Nutcracker didn’t become popular just for its magic, which showed how a toy could transform into a hero and regain a kingdom or how a little girl in pajamas could become a fairy princess. It was a fairy tale that in its small way showed many small traditions related to the festival, Central European or Russian traditions.

As in the small scenes where children dance around the tree or play with the top to win money. Or when they receive the mechanical soldiers or they dance the Galop, a French dance.

Into the second part, the part in the fantastic realm, the fairy tale also expands on the anthropological level. With a completely original way, the characters that follow each other at the court of the Confetto Fairy are food elements that perform in dance typical of their countries.

It is also important that the main Fairy echoes something to eat, such as a candy. A sweet, clear food, which refers to cheerful celebrations.

These references to food, in my opinion, contain an even more delicious enchanted dimension that refers to the fact that in North and Eastern Europe (and later in the United States) it is typical to use decorations made with biscuits, gingerbread, marzipan or candies. Hence the creation of a parallel world in which an object that crushes a nut is evidently a warrior, while a white candy is a princess.

And that the antagonist could be a sworn enemy of that type of frosted decorations, especially in the 1800s and 1900s: mice.

In the images of the Bohemian artist and illustrator Artuš Scheiner, who represents history, we can really see this search for mystery and nocturnal enchantment.

In a very over the top, almost cartoonish Art Noveau style, the artist represents the moment in which adults, after the Christmas party, give in to sleep and from there begin all the adventures of Clara and her Nutcracker, who intervenes in defend it from attack by mice.

The first mouse is seen running around in the crib of a sleeping child, while even the cats are asleep. The whole thing is cloaked in a fantastic deep blue (ideal for us!), Which of course suggests the night and also the fact that certain magic can only happen when adults are not looking. Because it is the mystery of children.

In the second illustration, here is the key moment of the story: the little Nutcracker has come to life and shows himself to Clara, aware that she is the heroine who will help him get home.

In the simplicity of the scene and in the symbolic colors (the blue of the night and the orange of the candle) we pass from a secret world to a fantastic world, which we all dream of when we go to sleep on Christmas Eve.

It can be the birth of Baby Jesus, the arrival of Santa Claus, three spirits who want to teach us something or an incredible adventure that can lead us to wonderful worlds.

In the morning, then, everything will be in its place: the gifts will be under the tree and the toys will be back toys and will be next to the bed (like Artuš Scheiner, in the last illustration he shows us).

Precisely because among the various characteristics of this fairy tale, there is something common to all fairy tales: they are ineffable and last only the time to live them. Not enough to fully believe it.

We believe in this.