What exists between Degas and his dancers 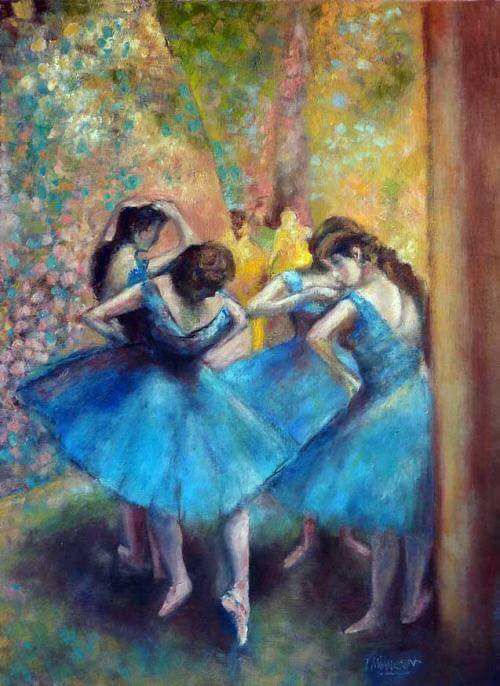 << Why do I paint the dance? It is the movement of people and things that consoles us. If the leaves of the trees did not move, the trees would be infinitely sad and their sadness would be ours. >>

What exists between Degas and his dancers is something surprising; that exists in the connection between this way of seeing movement and the way of sublimating it through painting.

It is not painting in general but THIS type of painting: flaking, incorporeal, aerial, mixed, foamy, vaporous.
Far from the solidity or the precise variety of the various details.

We are talking about the painting of Edgar Degas
Because this is the only way to capture the fluid and almost sacred physicality of dance.

The paradox is that behind its lightness, dance hides its strength, stability and millimeter precision.

When two worlds collide. In blue of course!

What I would like to talk about in this article is this very simple but at the same time extremely interesting mix.

How do you combine the fluidity of a type of painting so free and devoted to free expression with an iron and precise discipline like classical dance.

What exists between Degas and his dancers is hidden in their stories but also and above all in their forms, embedded in those unique works.

We are talking about the environment of the Paris of the 19th century: the Paris where, in terms of sophisticated pastimes, the Opera dictated the law. Since it was not just a theater, but a real hub for high society and the good bourgeoisie.

A place where business and weddings were combined, where the image was fundamental and where gossip was king.

In the years of Degas’s art, the gallery owners and the artist himself declared that the dancers were the most requested subjects among the buyers. Imagine an evening at the Opera, with a ballet on stage.

There was immediately a very strong distance and at the same time closeness between two types of unspoken beatitudes of the female universe.

Among the audience there were elegant and high-ranking women, with whom to engage in gracious conversations. They were cheerful and sparkling. A behaviour full of modest manner (because the public image in society was everything, as Anna Karenina teaches) but intimately malicious. They behaved in a friendly and courteous manner. Perfect wives and daughters to show off and be proud of.

On the stage, however, graceful creatures such as angels could be admired. They wore stage costumes, their wrists, ankles, legs and necks were visible. The girls moved them with exquisite grace, and everything was clearly visible. Their dance was with athletic mastery, although many were of low social class. The dancers could and should have been looked at and there was no impropriety or jealousy. Society was there for that. It was a secret eye candy.

You could be delighted with a kind of woman of the world, perfectly integrated, but also with a free girl in the style of a nymph in the woods; which, depending on the plot, could embody fairies, peasants, princesses, gypsies, priestesses. Any fantasy could be realized.

This was dance in the time of Degas. The ethereal and weightless dancers, without family and without origins. Divine creatures. And the artist was not only fascinated by it, but also sensed the artistic value of the subject

Among collectors it was a hot topic and even today Degas is recognized by the less experienced as “the painter of dancers“.

In a monograph on Degas written by the authors Rocchi – Vitali, this quote by the philosopher and poet Paul Valery is inserted, who described precisely the etoiles of the Impressionist period:

<<No solids, in their bodies of elastic crystal, no bones, no joints, invariable joints, segments that can be counted … […] Never any human dancer, ardent woman, drunk with movement, with the poison of her excess forces, of the fiery presence of gazes full of desire, has never been able to express the imperious offer of sex, the mimic appeal of the need for prostitution, like this great jellyfish that, with the undulating shots of its wave of skirts and festoons, that raises and raises with strange and shameless insistence, turns into dreams of Eros “>>

Degas’s paintings of dancers have a much simpler legacy: his fascination with the female figure, even undressed as being truthful.

Although Degas has always been seen as an impressionist, for that famous wavy and sometimes hazy style, in reality his primary eye guided him more towards realism, that of Manet, indeed even of Ingres.

The dancers were also too immersed in their fairytale and crystalline world to represent a subject that responds to the canons that Degas seeks. They represented the movement in action.

He then began to look for them when their grace failed. When they went back to being normal girls, even worse: those who yawned rudely, those who ate behind the scenes, those who had red knuckles for fighting, those who scratched their backs, those who caressed a partner.

He began to paint the rehearsals, the moments of rest, the lessons and the expectations.

All things that the gentlemen with the top hats in the foyer did not even imagine. Normal life for them was the ladies in baggy talcum-soaked hats.

Here we come to the first solution of the equation

That famous dimension of gracefulness, weightlessness of perfection and mischievous permissiveness that so pleased the audience takes place exclusively on stage. In another world.

For those who do it or have done it, dance is an art in which the body has a weight. And you have to fight against it. Trying to go higher and higher while the bones, muscles, arms would like to go down. It means subjecting the foot to an effort between the improbable and the unnatural.

Twisting an ankle, hitting a knee, bending your back as if in the wind.

Constantly improving, without ever showing signs of fatigue, especially on stage. Only magic was to take place there.

In fact, there is an immense difference between this:

In the first – very famous – work of the shining ballerina, we witness what was the famous miracle of the stage: the beautiful dancer, smiling and satisfied, is preparing to receive the applause of the public, stretching herself in the pose of an angel who has just landed on the world. His is the only figure that can be seen concretely, the rest appears confused and rarefied in the mist of colors that the master has created. You can’t see it, but we seem to hear thunderous applause.

In the second work of “Seated Ballerina“, although there is still beauty, and even a certain degree of haughtiness, the sensations that transpire are very different. The body heavily abandoned on the armchair, the somewhat clear image of the flesh wedged in the folds of the black corset, the legs spread apart, the dress on the ground in front of the feet. A moment of complete relaxation with some hints of interesting and unusual vulgarity.

A wonderful work, in its realism and in its evident contrast between the figure of the dancer and such a coarse pose.

But this was the reality of things, perhaps an acceleration of intent but it was enough to create a unique artistic model of its kind.

The image of dance that Degas wanted to restore was at the same time part of that forbidden and wonderful world that the gentlemen yearned for when they climbed the stairs of the Paris Opera, but also a real and concrete world. In which the dancers were women and not nymphs.

A real desacralization of a world of pristine class.

What exists between Degas and his dancers is this simple love for life and truth that deviates from the ideal of the dancer that society had in the painter’s time. His pasty but also undulating and hazy way of using pastel (also used for the possibility of having a faster execution than painting) is combined with an intention of technical perfection that however tends to the real and the original.

Likewise, dance uses the total physicality of the body, hands, face to create an illusory world. But dancers know very well how much work, sweat, blood, tight muscles and broken nails it takes to create that magic.

What exists between Degas and his dancers is the symbiotic relationship between the painter and his subjects; it was based on the fact that it had actually gone to see what was behind the “Veil of Maia” of the stage.

And had decided to portray him anyway.

Because it is beautiful, it is authentic and makes you dream even if it is broken up.

Both the color and the poses. 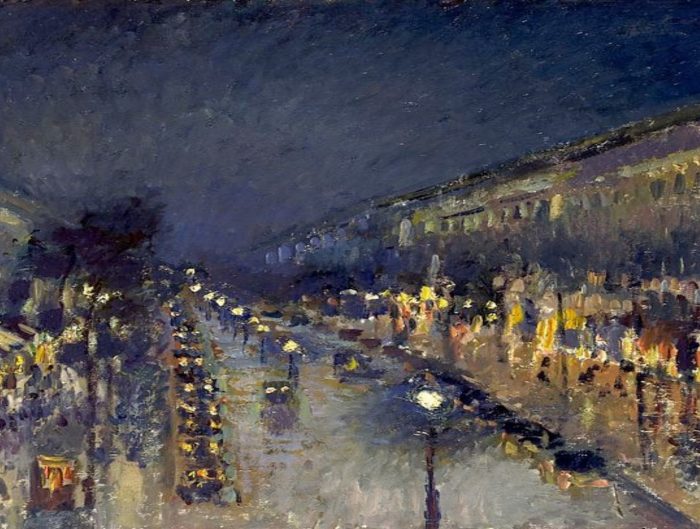